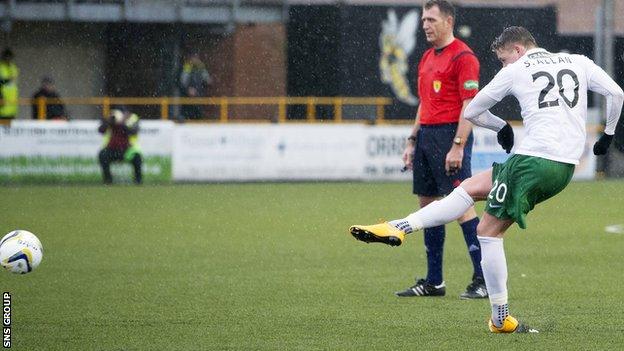 A Scott Allan free-kick was enough to earn Hibernian maximum points in a drab encounter at Recreation Park.

The midfielder's clever effort found the bottom corner on 26 minutes, lighting up a contest low on thrills.

Allan grazed the crossbar with a 25-yard strike in the second half before substitute Martin Boyle forced Craig McDowall into a smart stop.

Boyle then spurned a great opportunity late on when he side-footed Jason Cummings' lay-off wide of the target.

Alloa pushed for an equaliser in the closing minutes but the visitors were rarely troubled defensively as they opened up a four-point gap on third-placed Rangers.

The only real moment of concern for Hibs came soon after the only goal when keeper Mark Oxley had to be alert to push away Philip Roberts' deflected strike.