Did the first game you go to finish 5-5? Were you left feeling ill after a dodgy burger at half-time, or was someone standing in your way so you couldn't see?

As part of our weekly tie-in with The Danny Baker Show on BBC Radio 5 live, BBC Sport asked you to share your memories from your very first match.

Here are a some of your stories, keep them coming on #bbcfootball and MOTD Facebook.

"Shouting, singing, and the smell of liniment"

Steven Fyfe: My first game was at Dundee United in the UEFA Cup. I remember a sea of orange and the smell of burger and onions.

Ywain Gwynedd: Everton 4 - 1 Tottenham- Gary Lineker scoring for Spurs and coming over to celebrate. Still convinced he was looking me right in the eye.

Pauline Milligan: Blackburn v Man Utd. I was nine-ish. Sitting on my dad's shoulders. Girls screaming at Best. No one could get the ball off him.

Paul Wood: Watching John Gregory throw bucket of water over a Bristol City player at the Baseball Ground when pushed into dugout!

"A man gave me jelly babies"

Roy Jackson: Taking my lad to his second game today. Asked what he remembered from his first, he said: "The man in front gave me jelly babies." 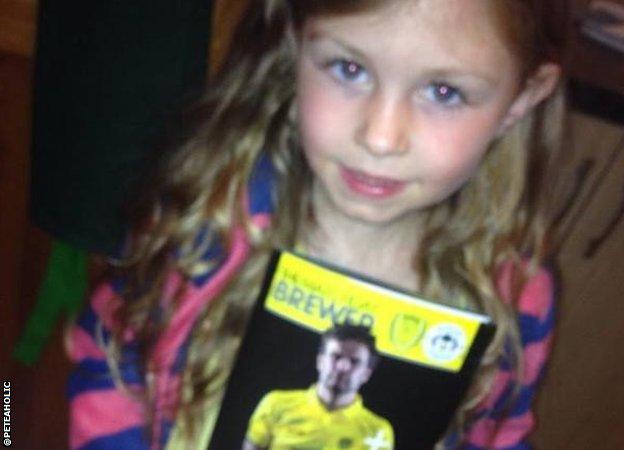 Pete-a-holic: Took my daughter to her first game at Burton Albion vs Wigan in the cup. Loved it!

Lance Cunningham: A 1-1 draw at the Forest V Newcastle in 1996. I remember taking my signature book just in case I saw Ian Woan after the match!

Kean In: Altrincham v Whitby in Feb 2003-ish- Colin Little scored a hat trick in a 4-0 win and gave me a high give. A hero was made! 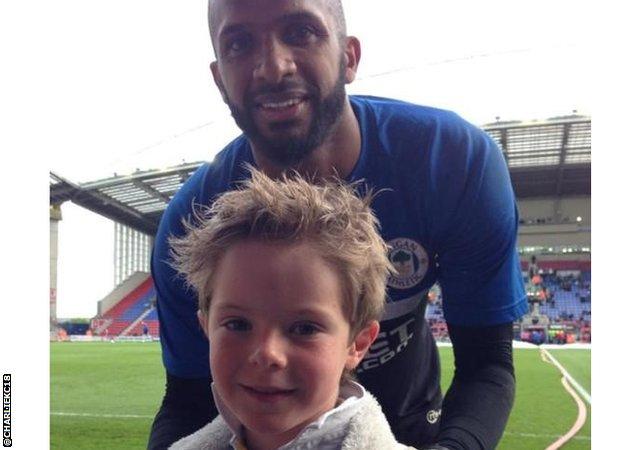 Charlie Keegan Cuss: My brother (seven) went to his first football match and got to meet Ali Al-Habsi last season.

Katie Maycock: Arsenal v Villa April 1977. I was four. All I remember is desperately trying to sit still so my dad would let me go again.

Nik Edwards: 1982 - Aston Villa v Dynamo Kiev. Eight years old. My dad tried to smuggle me in through the turnstiles. Under instruction to crawl below the counter whilst he paid for himself, the cunning plan was foiled when I bumped my head on the said turnstile and let out a perfectly audible 'Ow!'. At least we got a win for the additional cost.

Chris Lofthouse: My little lad's first game at Blackburn. Keeps asking to go every match. Only two and loves the Rovers.

Liam Brennan: Sunderland 3-0 Chelsea. December 1996. Roker Park. Kevin Ball scored a diving header. I thought that was the norm from then on... 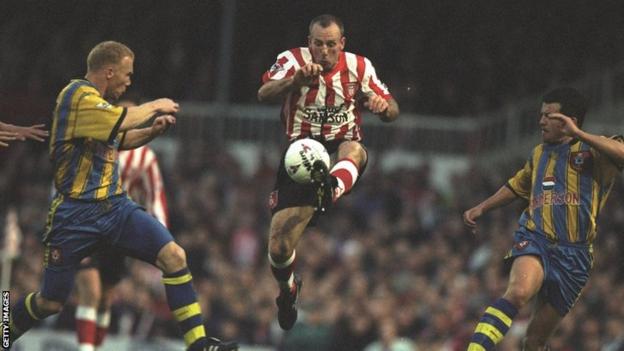 Matt Nightman: Manchester v Newcastle United in 2004. Taking a penalty at half time against City's mascot and not even reaching the goal...

James: At my first game Aston Villa beat Wimbledon 7-1 and my expectation levels were set. You can imagine my confusion for a while after...

Alex Uney: Gianfranco Zola scoring a backward header and me headbutting a steel pillar walking away in awe.

Jimmy: England v Cameroon circa 1992 at a snowy Wembley. Aged six, I missed most of the match as I was fast asleep in a sleeping bag.

"I got a clip round the ear"

Stu Teare: Dad telling me not to use those new words from songs about the Villa in front of mum!

Daniel Farren: St Mirren, Love St, 1984. Aged four, I put chewed chewing gum in my mouth. A clip round the ear from dad is my next memory. 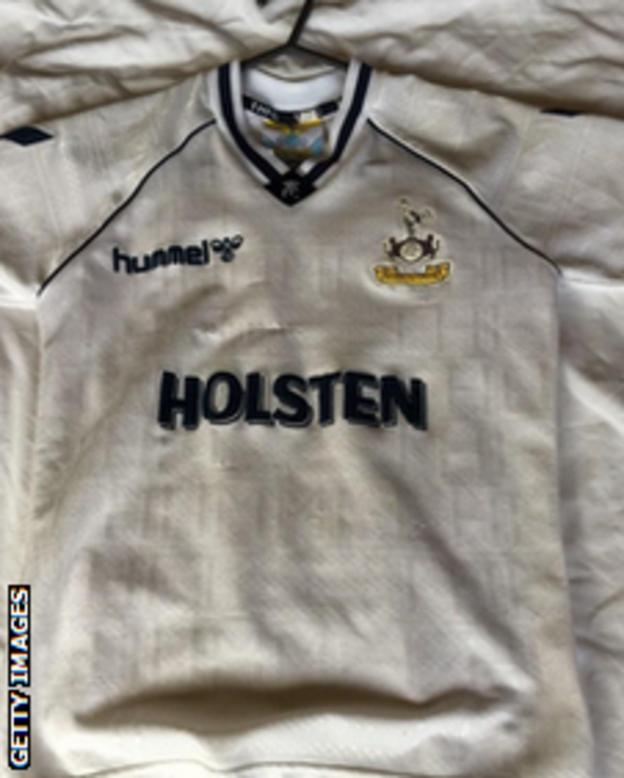 Shane Stopforth: Freezing to death at Burnden park aged 12 on my own. Sat next to an old man who did not speak a word to me, at the start of the second half he emerged with two cups of Bovril and handed me one. Never seen him before or since and still love Bovril.

Stuart Tidman, Coventry: May 1985 - Coventry needed to beat newly crowned League champions and European Cup-Winners' Cup victors Everton to remain in the old First Division. The Sky Blues won 4-1, I was bear hugged to within an inch of my life by my father every time City scored.

"I cried my eyes out" 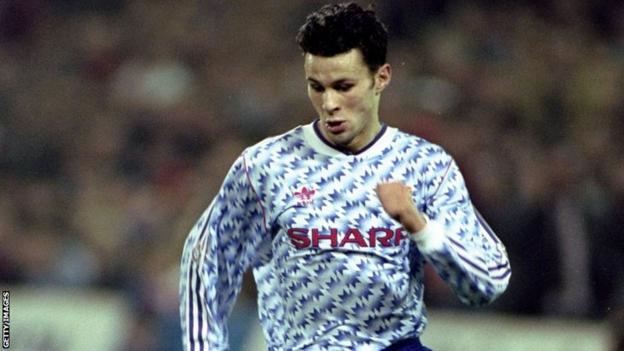 Keith Johnston: Man United v Everton 1991. I was six years old and got hit by the ball from a Ryan Giggs shot, cried my eyes out at the time, but a few years later it seemed quite cool!

Peter Whitely: Chesterfield v Tranmere 1972. It was the amount of cigarette smoke generated by the crowd at Saltergate!

"I was surrounded by giants" 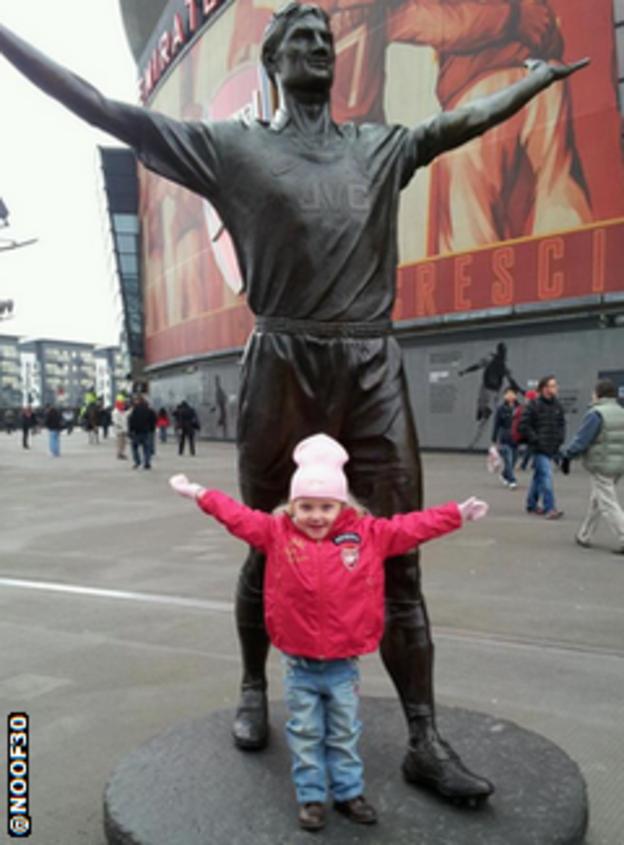 Nath Moss: Took my girl five, to her first game v Aston Villa two years ago. She had great time and has been a regular since.

Ian Mowbray: I remember being surrounded by giants, unable to see. Then one of the giants, my dad, raised me on his shoulders and I saw a new world!

Toby Elliott: First game at Stamford Bridge, key memory, meeting Roberto Di Matteo, having him sign my programme with a crayon. Dad didn't have a pen...

Tom Roberts: Four years old, at Northampton Town's Old County Ground, standing behind goal on a stool to see and got hit by the ball from a wide shot!

Simon in Runcorn: I was working in Spain with an American colleague visiting Europe for first time. Took him to Barcelona when Rivaldo scored that overhead kick. My first match was at Wrexham when my granddad took me to The Racecourse. What a contrast!