The hosts won 2-1 as Ki Sung-yueng equalised within two minutes of Ander Herrera's opener before Jonjo Shelvey's shot deflected in off Bafetimbi Gomis.

The Swans beat Louis van Gaal's side by the same scoreline at Old Trafford on the opening day of the season.

"These are the type of things you remember, stuff to tell the grandchildren," said Monk.

"To make history for this club is fantastic for this team to be remembered - and it is no mean feat.

"Everyone connected with the club should be extremely proud of that."

Ki has scored in both Swansea wins over Manchester United this season and says beating them for the second time made for "a special day".

He added: "It's amazing we won twice in the season against Manchester United.

"I don't know if we can do it next season, but this season it was unbelievable."

The South Korean says he gained confidence from a tactical approach that differed from their opening-day win at Old Trafford.

"It's a special day for myself and then all the team-mates," said Ki.

"Before the game the gaffer just said to us 'let's make history, we can win twice against Manchester United'. 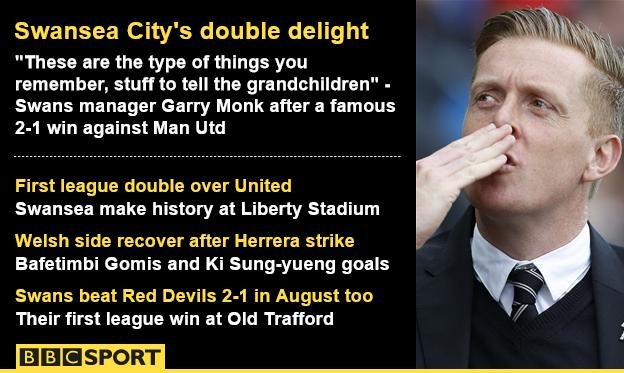 "And I think the boys really worked hard and we were desperate to win the game and this is a crucial game for us in the table.

"I just tried to help myself for the team and then today, tactically, it was a little bit different compared to the last game.

"But we handled it very well and I needed to adapt in a new position and offensively I had more confidence."

The visitors dominated possession in the second half and came close through Marcos Rojo's header, but they could not find a way past Swans goalkeeper Lukas Fabianski.

"We had to ride some pressure second half but we're playing Manchester United," added Monk.

"They're always going to create but I think they had only one shot on goal second half."

The Swans have earned 37 points so far and remain in ninth place in the Premier League table with 12 games left.

Monk has not set his side a specific points target, but he wants the historic double over United to trigger a successful end to the season.

"The Premier League is unforgiving," he said. "Unfortunately in football you're only remembered for your last 10 or 15 games.

"It's important we finish the season how we started it and how we've been so far - and that we put in big performances like we did today."