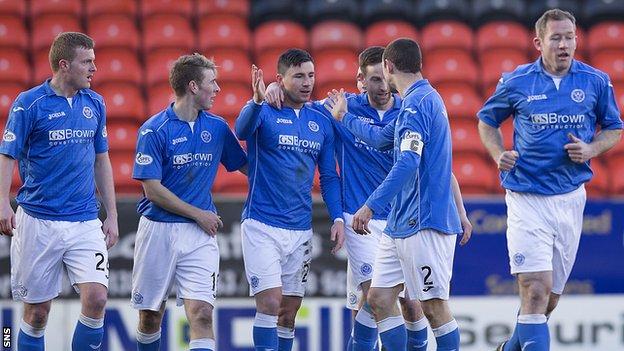 A first-half double from Michael O'Halloran secured the points in a Scottish Premiership match the Perth men dominated.

And Wright was delighted to maintain the push for a top six place.

"We needed this win here," he said. "It's a difficult place to come to.

"We dominated large parts of the game and I thought we deserved to win 2-0. We probably could have scored more goals as we were the team creating the clear-cut opportunities.

"We're delighted with the overall team performance and the three points because the teams around us probably thought this was a place where we would drop points."

Wright added: "I expect these good things from Michael O'Halloran. Michael can be what he wants to be in the game. He can go where he wants. His attitude and application is superb for us."

Dundee United manager Jackie McNamara said: "I think the first goal is always crucial against them. It gives them something to hang on to.

"It was disappointing, the first goal we lost and, to be honest, the full game. There was no fluency. It was stop-start with free-kick after free-kick.

"As we've seen before, they are always a difficult team to play against when they get the first goal.

"I wouldn't blame Michal. When you see the goal again he could have done better.

"Rado Cierzniak has been troubled a little bit of late with a thigh injury. He's played through it and took a bit of criticism.

"So I thought we'd take him out the firing line today and in hindsight it's probably a good thing.

"We just have to look forward to Tuesday's game with Inverness."