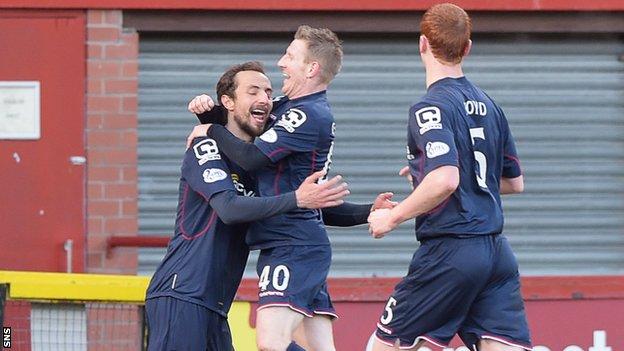 Jim McIntyre was delighted with the stroke of luck that helped his Ross County side move off the foot of the Premiership table.

The Staggies beat Partick Thistle 3-1 in Glasgow, with their first goal coming from Craig Curran after the ball fell kindly for him from a deflected clearance.

The win leaves County third from bottom on goal difference.

"I'm delighted," McIntyre told BBC Scotland. "We got the break with the first goal and from that point on I thought we put in a strong performance.

"We've not had many this season but we definitely got the break there, and it's what you do after that - we capitalised on it. We scored a couple of excellent goals, with the pick of the bunch being Marcus Fraser's. It was a great move and well executed."

Curran missed a second-half penalty before Raffaele De Vita added the second and Lyle Taylor pulled one back for Partick, but Fraser secured the win minutes later.

"With the penalty, you think that could come back to bite us," added McIntyre. "It never and credit to the players for that, they didn't let it affect their performance and they kept at it.

"Thistle had a real go but we managed to pick them off a couple of times and could have scored a couple more.

"We know that to win matches we're going to have to defend well as a team and to a man, we did the ugly side of the game well. Everyone was doing their jobs, which then affords you the chance to go on and win the game. The points were thoroughly merited."

The defeat leaves Partick on 25 points, just seven points clear of County, second bottom St Mirren and Motherwell, who prop up the rest.

And Jags manager Alan Archibald said: "All credit to Ross County, they were the far better team from the start of the game. We gave ourselves a chance with our goal, but it was a comprehensive win for Ross County.

"They looked like they had something to play for today, and we didn't, but we have. We've got pride to play for first and foremost, and we need to win points or we will be dragged into the relegation battle. We're in one at the moment, we know that.

"Seven points isn't a lot, we said to the lads we are in a relegation battle if we play like that. We've got to play with a lot more hunger and desire and get the basics right. Ross County did that today and got rewards.

"Sometimes you can't play pretty football, it wasn't on to do that today, the pitch was bobbly, and we got caught a number of times trying to pass the ball in the wrong areas, and we didn't defend well enough."