Clips of the incident during Saturday's Conference North match have been viewed more than 12 million times.

"The football club in no way condones reactions like that," said Heeley.

"But he's had three or four career-threatening injuries from poor tackles. There's certainly a defence there."

Khan was sent off in the closing stages of City's 2-0 win, while Russell was booked for his initial challenge.

Heeley said Khan was "apologetic" for his "over-the-top reaction".

He told BBC Hereford & Worcester: "We've got to remember that incident wouldn't happen if the Stockport player didn't commit an awful challenge. There were a number of poorly-timed tackles that we were the victims of.

"Football's an emotional game. Shab is a lovely, mild-mannered lad. He will just feel he's let his team-mates down.

"He's just got a run of games in the side. There had been extreme provocation and we can certainly understand it."

Since his debut in 2004, Khan has broken an ankle and dislocated an elbow, before missing the majority of two seasons with a serious knee injury sustained in August 2010. A groin operation last summer delayed the start of his season until October.

"I'm not a great believer in speaking to players right after the game when the emotions are high but one thing is for sure, he'll get my and Worcester City's full support," said Heeley.

"The unfortunate thing is that we're now going be without a player who is suspended and incredibly the Stockport player who committed the challenge only got a yellow card."

How the incident was described 'live' 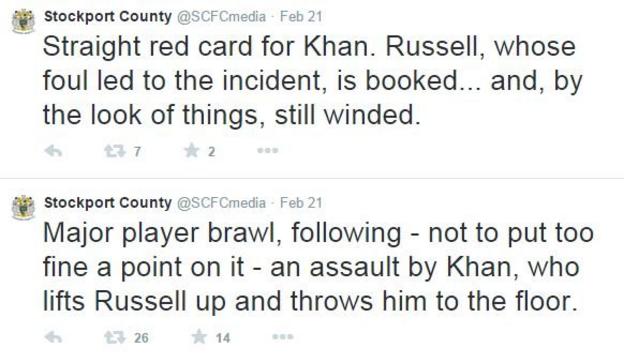