Luis Suarez marked his first return to England since a £75m summer move to Barcelona with two goals that leave Manchester City on the brink of a Champions League exit.

The former Liverpool striker demonstrated the quality the Premier League has been missing - and which defenders have been spared - with two strikes in the opening half-hour to put Barcelona in command of this last-16 first-leg tie.

City improved after the break and were rewarded with Sergio Aguero's strike but their growing momentum was halted when Gael Clichy was sent off for a second yellow card.

And even though they still face a mountainous task at the Nou Camp in the second leg on 18 March - they need to score at least twice to have a chance of progressing - they were spared an even tougher job after keeper Joe Hart saved Lionel Messi's penalty from virtually the final kick of the game.

Uruguay international Suarez preyed on the uncertainty of City captain Vincent Kompany throughout and with Messi the orchestrator, Luis Enrique's side tormented the Premier League champions in the first half.

Suarez ended this summer's World Cup in Brazil in disgrace after biting Italy's Giorgio Chiellini but it was not enough to dissuade Barcelona from taking him from Liverpool to La Liga and this was an illustration of exactly why, the movement and menace a familiar sight to those who had watched him terrorise opponents in the Premier League. 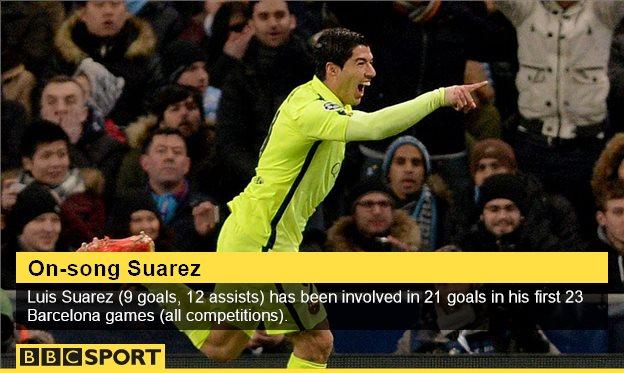 City manager Manuel Pellegrini will take some heart from the manner in which they created chances in the second half but in reality Barcelona are now overwhelming favourites to progress as they took advantage of the timidity of an opposition, without suspended midfield talisman Yaya Toure, who showed them far too much respect in the first 45 minutes.

Aguero's goal and Hart's save offer a lifeline but it is flimsy at best and City will need to produce a special performance in Catalonia to reach the quarter-finals.

Suarez, so often cast in the role of the Premier League's villain during his time at Anfield, was jeered when his name was read out before kick-off - but he soon turned the taunts back on his tormentors as Barcelona produced an imperious first half display.

He had already threatened before he put Barcelona ahead after 13 minutes, reacting quickly to fire a low, angled finish past Hart after Messi's cross had rebounded off Kompany.

City's lame approach was in contrast to Pellegrini's claim that they would attack Barcelona and they were lucky not to fall further behind when a brilliant pass from Messi released Suarez in behind Kompany but Hart rescued City with a crucial block at the striker's feet.

Barcelona only ever seemed a moment away from another goal - and so it proved when Suarez pounced for his second on the half-hour, showing great instincts to turn Jordi Alba's cross at the near post.

Dani Alves sent a glancing effort off the bar before an agonising first half drew to a close for City and supporters who had suffered in silence for long periods as Barcelona went through their party pieces.

City, as they had to do, showed some attacking ambition after the restart and should have pulled a goal back when the unmarked Edin Dzeko headed straight at keeper Marc-Andre ter Stegen from only six yards out.

Aguero, so industrious despite barely having any service worthy of the name, was then only inches off target as City finally looked capable of posing Barcelona problems.

Suddenly there was hope for City, although some of that was extinguished as Clichy was sent off four minutes later after receiving a second yellow card for a mistimed challenge on Alves.

Messi had the chance to heap further punishment on City when he was fouled in the area by Pablo Zabaleta in the closing moments but Hart blocked his spot-kick and the Argentine headed wide of an open goal.