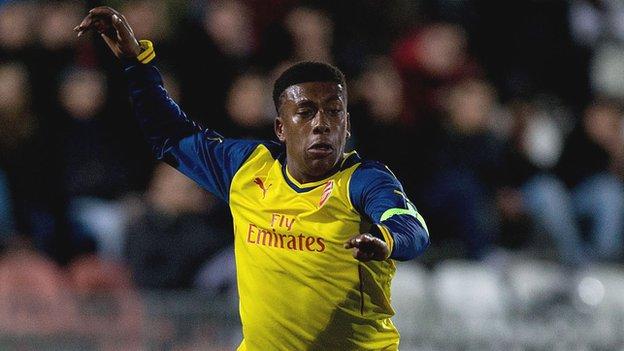 Former England youth international Alex Iwobi says he is happy to wait until March to make his debut for the country of his birth, Nigeria.

The 18-year-old Arsenal midfielder had been due to play in Saturday's 4-1 win over Gabon in an All Africa Games qualifier but watched from the stands.

The Nigeria Football Federation (NFF) are waiting for clearance from Fifa for his switch of national allegiance.

"I understand I have to wait," Lagos-born Iwobi told BBC Sport.

"I grew up watching Nigerian football and read all about my uncle's [Jay-Jay Okocha] remarkable career and the success story of [Nwankwo] Kanu with Nigeria and Arsenal.

"It's my second time with the U-23s and I think I have made the right decision coming here."

Iwobi captains Arsenal's under-21 side and has represented England at under-16, 17 and 18 level.

"Having represented England at youth level, we decided to leave him out against Gabon because it's an Under-23 game and we'd need a clearance from Fifa before he will be eligible to play for us," NFF spokesman Ademola Olajire told BBC Sport.

"We've already started working on his application and a couple of players for a nationality switch.

"We are doing everything possible to sort this so that he will be eligible to play for Nigeria hopefully in the friendly against Bolivia on March 26."

Despite only a week's training with the country's Olympic side under the guidance of Samson Siasia, Iwobi has quickly identified the difference.

"First thing is the weather, the football is also different, it's more physical and you have to think quicker on the ball," he said.

"Coming from England, these are important lessons that will impact my career and make me a better player.

"The ambition is to break into the Arsenal first team plans and fulfil my ambition of playing at the top level on a regular basis," he added.

"The main thing for me is to keep working hard as I still have a long way to get to the top."

He has progressed through the Arsenal youth system and scored eight times in 35 appearances for Arsenal's various youth sides last season.

He is close to making his first-team breakthrough at the Emirates Stadium after featuring on the bench for Arsenal's Champions League clash against Galatasaray in December.