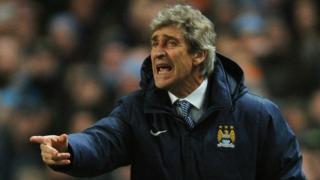 Despite having lost the first leg 2-1 at the Etihad Stadium on Tuesday, Pellegrini believes if City play like they do in the Premier League, they still have a chance.

Former Liverpool striker Luis Suarez scored twice in the first half before Sergio Aguero pulled one back for the home side and keeper Joe Hart saved a penalty late on from Lionel Messi.