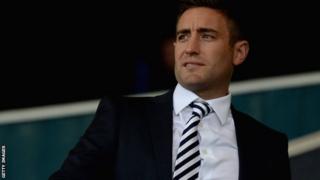 New Barnsley head coach Lee Johnson tells BBC Radio Sheffield he thinks the team are capable of a late push for a place in the League One play-offs.

The 33-year-old joined the Tykes from Oldham on Wednesday on a three-and-a-half-year deal.

The Oakwell side are currently 16th in League One but are only four points off sixth-placed Bradford City.