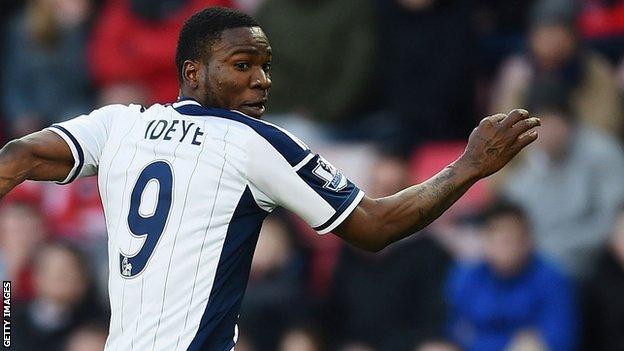 The 26-year-old has not played for the Super Eagles since November 2013 and missed out on last year's World Cup.

But Ideye has scored four goals in four games for his Premier League side, prompting Amokachi to call him "our best striker in Europe at the moment".

"Any coach would want him in his squad. His new-found form has not gone unnoticed," Amokachi told BBC Sport.

"When you look around all the top leagues in Europe he is the best performing Nigerian striker.

"That's exactly what you expect from a player giving 120% on the pitch, it's also what we require of our players, so it's only fair and objective to recall him."

Amokachi has been in charge of Nigeria on a temporary basis since December - following the departure of Stephen Keshi, who was unable to agree a new deal with the Nigerian Football Federation after failing to qualify the team for this year's Africa Cup of Nations.

But Amokachi insists the the uncertainty surrounding the coach's position should have no bearing on whether Ideye is given another opportunity for his country.

"It doesn't matter who is in charge, Ideye is in fantastic form, he is scoring goals and creating them in one of the best leagues in the world," he said.

"We are happy for him and wish him all the best in subsequent games at his club."

Ideye has scored five goals in 24 appearances for Nigeria.

In 2013, he helped his country clinch their third Africa Cup of Nations title, scoring in the 4-1 semi-final victory over Mali.

A member of their 2010 World Cup squad in South Africa, Ideye was omitted from the Nigeria squad that reached the second round at the 2014 World Cup in Brazil.