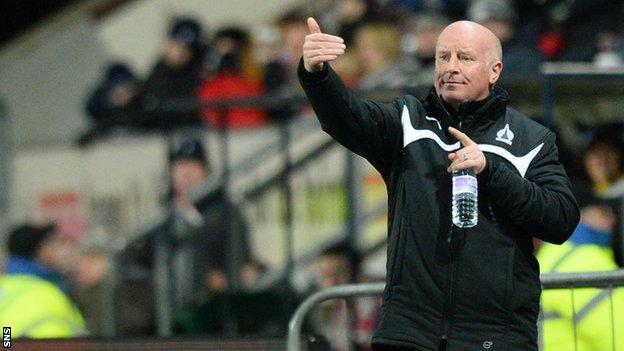 Falkirk manager Peter Houston admits his side must become more clinical as they look to secure a Championship play-off spot.

A Rory Loy goal gave Houston's team a 1-1 draw with Rangers on Friday night, after Darren McGregor had edged the Ibrox side ahead.

The Bairns moved up to fourth spot thanks to the point, but Houston knows it is a game his side could have won given their first-half dominance.

"We've improved as the season has gone on and one defeat in 15 games tells you that," he told BBC Scotland.

"We have to start turning them into victories though. We have went into fourth place and Queen of the South have games in hand, but we have to play each other still.

"Our strikers worked Rangers really hard, we never gave them a minute's peace, we pressed them high up the pitch and we had the best chances in the match.

"I don't think Jamie MacDonald [goalkeeper] had an awful lot to do, even in the second half there was very little he had to deal with, and that tells you we were the team on the front foot.

"The second half was more scrappy but I was delighted with the players' effort, commitment, attitude and work-rate as well. In the first half we played some decent stuff."

Rangers interim manager Kenny McDowall was "disappointed" his side missed the chance to go second in the Championship table.

But he told BBC Scotland: "I think it was a point gained because we were poor tonight in terms of how we've been playing the last couple of weeks.

"To be fair to the lads, they battled away in the second half but the first half was poor and nothing like the standards we've been getting to. I told them we need to do far better, I felt the passing was poor tonight and we kept a deeper line than I'd have liked.

"Falkirk played well and kept us pegged back for spells in the game.

"I said at half time that I thought we were standing off them too much and we had to get in their faces a bit more.

"We dug in in the second half and I was pleased with that.

"The rest of the teams have got to play tomorrow and we'll see what that brings. This is not an easy place to come so leaving here with a point is not a bad result for us with the changes we had to make tonight."