Cardiff City owner Vincent Tan wore blue to watch the Bluebirds for the first time since they were relegated from the Premier League in May 2014.

The Malaysian billionaire walked around the pitch before the Championship clash against Wolverhampton Wanderers and was well-received by supporters.

It is the first time Tan has been to a Cardiff game since changing back the home shirt colour from red to blue.

This week, accounts revealed the Welsh club are £174m in debt. 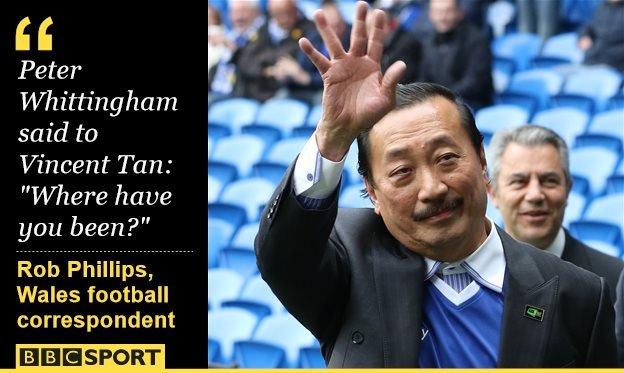 The financial figures for the year up to May 2014 also show Cardiff lost £12m during their Premier League campaign.

A rebrand to red had been controversially introduced by Tan in June 2012 after he bought the club.

"Whittingham said to Vincent Tan 'Where have you been?'," Phillips reported, adding: "Whittingham is one of the few Cardiff City players who could get away with that."