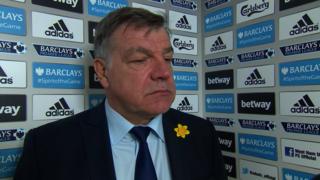 West Ham manager Sam Allardyce says he is "shocked" by his side's performance and is worried they are "drifting the wrong way" down the table after losing 3-1 at home against Crystal Palace.

A Glenn Murray brace and a goal from Scott Dann gave the Eagles a comfortable win despite an Enner Valencia consolation goal for the Hammers.

West Ham conceded three goals in a Premier League game for the first time since August.