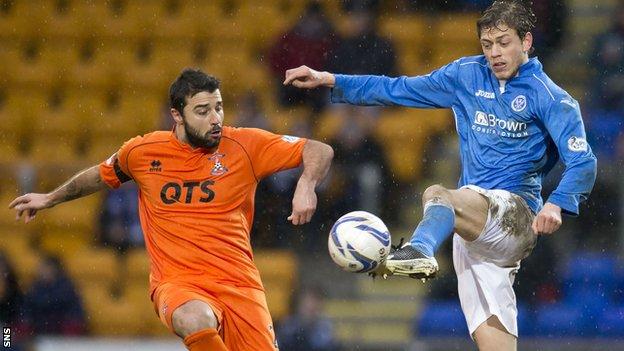 St Johnstone manager Tommy Wright felt his side deserved more than a point after seeing them draw 0-0 with Kilmarnock.

The Perth men would have gone into the Premiership's top six with a victory but in the end they had to settle for a share of the spoils.

"I thought it was a game we should have won," said Wright. "We dominated possession and particularly in the first half we played quite well.

"Overall I think we deserved a win but we didn't really make the most of the opportunities we had.

"I have got to be happy enough with the performance and how we played but the result is a little bit disappointing.

"Our play in the final third let us down a little bit. We didn't get balls into the box early enough. By the same token we made far too many mistakes at the other end, individual errors that caused us problems.

"Kilmarnock had to defend quite a lot and they defended well because I think we had 12 or 13 corners during the game."

Kilmarnock are now unbeaten in four games under interim manager Gary Locke, who was thrilled to pick up a point in Perth and stay in the hunt for a top six finish.

"I was delighted with the performance," Locke said. "It was a difficult day to play football with the conditions. Both myself and Tommy Wright like our teams to play but sometimes you have to look at the conditions and think it is not a day to play pretty football.

"In terms of the team's work rate, effort and commitment, I could not be happier and I am delighted to get a clean sheet at a difficult place."