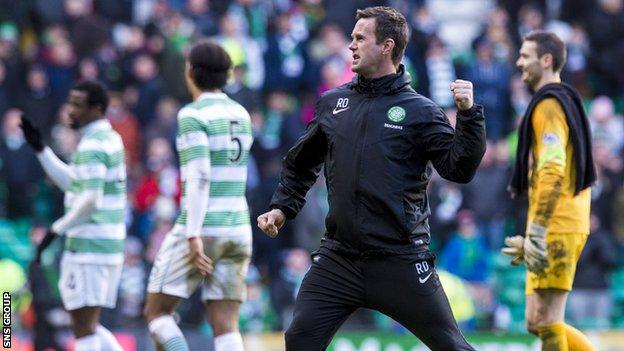 A strong second-half performance yielded three goals in a 4-0 victory, which stretches the defending champions' lead to six points.

"No, it's not [over] but it was an important win, not only because we got three points against our nearest challengers," Deila told BBC Scotland.

"But, mentally, we showed we are the best team."

Celtic have a vastly superior goal difference and will move nine points clear if they make it nine consecutive league wins at home to St Johnstone on Wednesday.

"Eight [wins in a row] is nice, and we want more," added Deila, who is targeting Celtic's first domestic clean sweep since 2000-01 in his debut season.

"We have a focus on developing all the time and we're going to use every game this season to get as good as possible and hopefully get the treble."

Aberdeen enjoyed a lively start at Celtic Park, with the hosts guilty of some sloppy play after their Europa League defeat to Inter Milan on Thursday.

However, Jason Denayer nodded them ahead from a 37th-minute corner and after the break Leigh Griffiths added a penalty, with Gary Mackay-Steven and Stefan Johansen also on target.

"We struggled in the beginning because they are a good team, they were fresh, and we didn't get up to the tempo that we have done lately," explained Deila.

"But I think we came more and more into it during the half and in the second half we were brilliant."

Efe Ambrose was given a rare start, deputising for injured left-back Emilio Izaguirre, and the Nigerian defender won praise from his manager.

"He's a good defender and he knows his role," said Deila.

"He is developing as a player and he needs to be more concentrated, but he did that today.

"We use the squad all the time and it's a big test for us on Wednesday. To come through two important games and now we have a normal game, if I can say that, and it's so important to win that game."