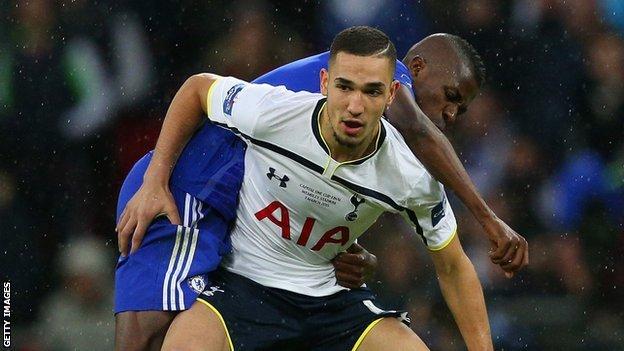 Nabil Bentaleb has urged Tottenham to put their Capital One Cup final loss behind them and push for a top-four finish in the Premier League.

Spurs lost 2-0 to Chelsea in Sunday's final and Algeria international Bentaleb says the aim must now be to qualify for a Champions league spot.

"We have only the Premier League to focus on and it will be a good race for the top four," Bentaleb said.

"We have to take the disappointment in the right way."

Tottenham lie in seventh place in the table, six points behind fourth-place Manchester United, although the Londoners have a game in hand.

They take on Swansea at home in the next match and Bentaleb, 20, said: "The manager told us we had to bounce back for the game against Swansea.

"Now we have to put some smiles back on our faces and on our fans' faces and Wednesday is a good chance to do it.

"I have experienced disappointment before, for example at the World Cup last summer when Germany knocked out Algeria. This was my first final and I hope we can learn from it."