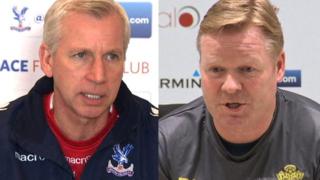 Pardew and Koeman ready for battle

As Newcastle boss, Alan Pardew was on the wrong end of a 4-0 defeat at St Mary's in September, but masterminded a 3-2 victory at the same stadium in the fourth round of the FA Cup as Palace manager in January.

Pardew has won all five of his away matches in all competitions as Palace manager, including three league games.