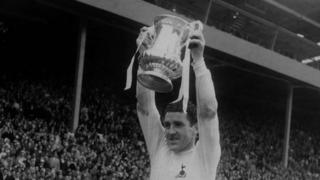 Watch former Tottenham Hotspur captain Dave Mackay, who has died at the age of 80, lift the FA Cup in 1967.

He won 10 major honours as a player in British and European football including a league and FA Cup double with Tottenham in 1961.

The Edinburgh-born player also won 22 caps for his country and was named 'Footballer of the Year' in both Scotland and England.