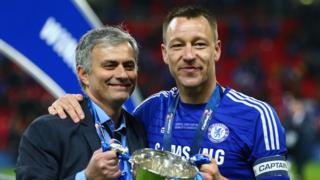 No doubt in Terry future - Mourinho

Chelsea manager Jose Mourinho says that captain John Terry has been offered a new one-year deal at the club.

The former England skipper's current deal expires at the end of the season.

Centre-half Terry, 34, has made more than 550 appearances for the London club since signing professional terms in 1998.