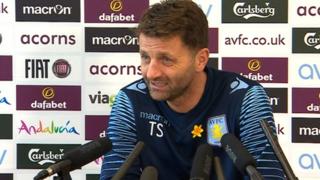 Aston Villa manager Tim Sherwood wants his side to "get on the front foot" and attack as they prepare to face West Brom.

The Villa boss tells journalists he does not know his best side at the moment, and still believes his strikers will score goals if the team creates enough chances for them.