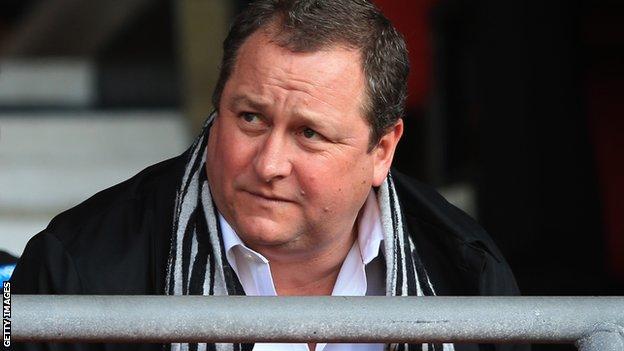 Newcastle United owner Mike Ashley has been fined £7,500 for breaching Scottish Football Association rules on dual ownership because of his influence on the affairs of Rangers.

A second charge brought by the SFA, that he failed to act in the "best interests of association football", was found to be "not proved".

Ashley, who owns 8.92% of Rangers's shares, has loaned the club cash.

Rangers will appear at a hearing on 16 March to answer three charges.

The SFA alleges that they have violated dual ownership rules and are not acting in the "best interests of association football".

In December, the SFA refused to allow the Sports Direct owner to increase his stake in Rangers International Football Club to 29.9%. He had previously signed an agreement that limited his shareholding to 10%.

However, Ashley has made cash loans to the cash-strapped Scottish Championship club, holds commercial contracts and has two close business associates, Derek Llambias and Barry Leach, operating as chief executive and finance director, respectively, on the Ibrox board.

However, their time in those positions looks to be coming to an end, with Rangers investor in his bid to oust the current board, even before voting takes place at an extraordinary general meeting at Ibrox on Friday.

James Easdale and chairman David Somers have already resigned, leaving Llambias and Leach hanging on to their posts.

In January, with bills to pay, the Rangers board agreed to borrow £10m from Ashley's Sports Direct, £5m of which was made available as immediate working capital and to repay a previous £3m loan made by Ashley.

For this, Ashley took security over the club's Murray Park training ground at Auchenhowie, registered trademarks and other properties, but not Ibrox Stadium.

Last month, Rangers manager Kenny McDowall said that he was told by Llambias and chairman of the football board Sandy Easdale that the five players loaned to the club from Newcastle must start every game, if fit. Llambias moved swiftly to deny the claim that the boardroom had any influence over team selections.

The SFA's judicial panel met on Monday evening to assess the case against Ashley but failed to come to a conclusion.

But on Tuesday afternoon it announced it found that he had broken disciplinary rule 19, meaning that, while he owns Newcastle, he had also influenced the running of Rangers.

However, the SFA say "the alleged breach was not proved" relating to disciplinary rule 77, which states that "a recognised football body, club, official, team official, other member of team staff, player, match official or other person under the jurisdiction of the Scottish FA shall, at all times, act in the best interests of Association Football".

An hour after the SFA announced Ashley's fine, the club released a statement to say they have begun the process of drawing down the second chunk of the £10m loan from the English businessman.

But in an announcement to the Stock Exchange the board warn that Sports Direct could be unwilling to release the funds, which they say are required by the third week of March.