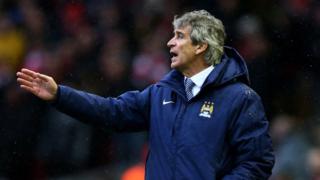 Manuel Pellegrini says he is under "no pressure" to win titles as Manchester City manager.

Pellegrini's men have won two of their past nine games in all competitions, losing to Middlesbrough in the FA Cup and Barcelona in the first leg of their Champions League last-16 tie.