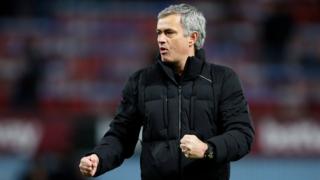 Chelsea manager Jose Mourinho says the Blues' 1-0 victory at West Ham is a "massive" three points for his title-chasing side.

Chelsea stay five points clear at the top of the Premier League as an Eden Hazard goal keeps them on course for a first title in five years.

Hazard has had a hand in 10 goals in his last 12 Premier League games (five goals, five assists).