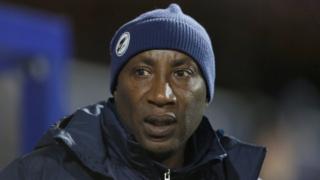 Chris Ramsey says he feels "sick" for his players after Queens Park Rangers lost 2-1 to Arsenal at Loftus Road.

Ramsey's side started strongly, but after a goalless first half Olivier Giroud and Alexis Sanchez put Arsenal 2-0 up.

Despite pulling a goal back through Charlie Austin's powerful finish, QPR could not find an equaliser and remain in the Premier League relegation zone.