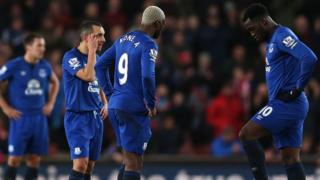 Roberto Martinez says his struggling Everton side are "missing energy" after the Toffees lost 2-0 to Stoke at the Britannia Stadium.

A powerful Victor Moses header put the hosts ahead before Mame Biram Diouf prodded in a late second for the hosts after Marko Arnautovic's shot had hit the post.

Defeat leaves Everton with 28 points from 28 matches - their worst tally at this stage of a season in the Premier League era.