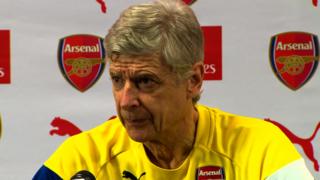 Scholes is wrong about Ozil - Wenger

Arsenal boss Arsene Wenger says Paul Scholes' criticism of Mesut Ozil is "wrong" and that the former Manchester United midfielder "would love to have played" with the German.

Writing in a national newspaper Scholes said Ozil took the "easy option" to join Arsenal from Real Madrid in September 2013 and the midfielder is just "going through the motions" at the club.

Follow live coverage of Manchester United v Arsenal in the FA Cup sixth round on Monday 9th March from 19:30 GMT on BBC One, BBC Radio 5 live and this website.