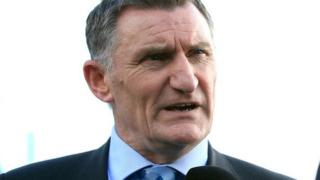 New Coventry City manager Tony Mowbray says he will not think about making any loan signings until he has had time to assess the players he has inherited.

"Every new manager will have his own ideas," Mowbray told BBC Coventry & Warwickshire. "But it would be totally unfair to bring in anyone without assessing what we've already got in the building. There's so much to do, but it will be another few weeks before I've got a clearer picture. I don't know their capabilities yet.

"I knew some from my knowledge of the game. But I was on the training ground not knowing some players' names, saying 'can he play there, can he do this?'"

Mowbray, 51, was appointed to succeed the sacked Steven Pressley as Sky Blues manager on Tuesday, initially on a short-term basis until the end of the season, and has inherited a City side currently a point clear of the League One relegation zone.