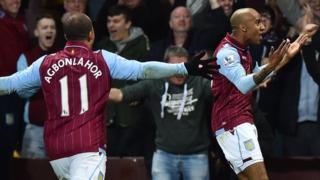 Brown Ideye spurned a glorious early chance for the Baggies after he fired a first time effort over from close range.

But second half goals from captain Fabian Delph and on-loan winger Scott Sinclair secured the Villains second victory over Tony Pulis's side in a week.

Both sides finished the game with 10-men as West Brom's Claudio Yacob and Aston Villa's Jack Grealish were sent off.