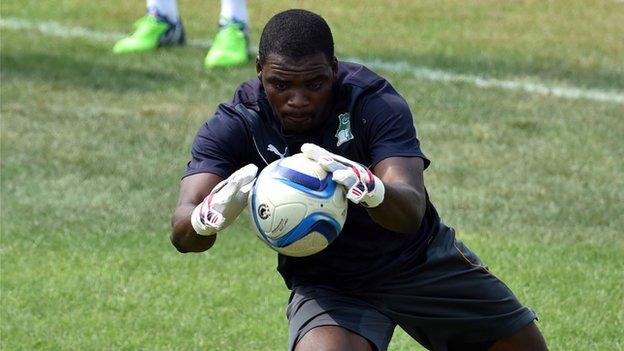 Ivory Coast and TP Mazembe goalkeeper Sylvain Gbohouo has flown to Qatar for treatment on his knee injury.

Gbohouo was the Elephants first choice goalkeeper at January's African Cup of Nations finals in Equatorial Guinea, which his side won.

He missed the final against Ghana after sustaining a meniscus tear in his knee during the semi-final against DR Congo.

Gbohouo is yet to make his debut for four-time African champions Mazembe, who he joined after the Nations Cup.

Mazembe president Moise Katumbi said that Gbohouo was released to go for the operation under the auspices of the Ivory Coast football federation.

"He left last week and he hasn't returned," Katumbi confirmed to BBC Sport.

"It's not a very serious injury but it was a question of solving a problem once and for all.

"He should be back in normal training at the most three weeks from now."

Katumbi, whose side play South Africa's Mamelodi this weekend in the first round of the African Champions League, said Mazembe will rely on experienced veteran goalkeeper Robert Kidiaba while Gbohouo recovers.

The Elephants are set to host Equatorial Guinea on 26 March and then Bolivia three days later.

The matches replace initial plans by the Ivory Coast FA to tour in Oman on the international dates.