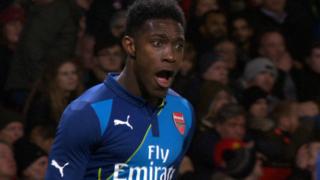 Watch highlights as FA Cup holders Arsenal go through to the semi-finals of this year's competition with a 2-1 win against Manchester United at Old Trafford.

Nacho Monreal fired the Gunners ahead before Wayne Rooney headed a quickfire equaliser, but former United striker Danny Welbeck had the final say when he pounced on an Antonio Valencia back pass to score the winner.

Arsenal will face Bradford or Reading in the last four at Wembley.