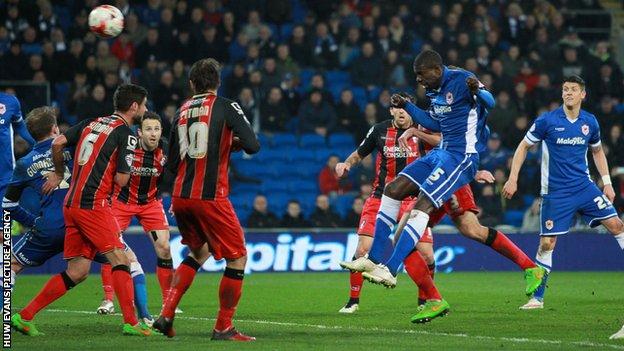 Bruno Ecuele Manga's second-half header secured a point for Cardiff as Bournemouth were knocked off the Championship summit.

Bournemouth slip down to third after promotion rivals Watford and Middlesbrough won on the road.

The draw sees Cardiff move up one place to 13th as they secured a second notable result in four days against promotion hopefuls.

Cardiff, chasing their first home win in two months, made two changes to the side which had won 2-1 at Brentford on Saturday.

Striker Kenwyne Jones replaced the suspended Federico Macheda while Matthew Connolly was added to the defence in place of Lee Peltier.

Bournemouth's only change to the side which started in the 4-0 win over Blackpool saw Arter return from suspension to replace Shaun MacDonald.

Marc Pugh gave the home side an early warning of Bournemouth's intent when the winger struck the crossbar after a fine run.

Craig Noone and then Alex Revell tested Cherries goalkeeper Artur Boruc in what was a lively opening.

The visitors took the lead in stunning fashion with the returning Arter's powerful 35-yard shot giving Simon Moore no chance.

Brett Pitman fired wide with a volley as Bournemouth went after a second, although Revell fired over the crossbar as Cardiff responded.

Fabio's timely interception stopped Matt Ritchie doubling Bournemouth's lead early in the second half while at the other end Jones's header was saved by Boruc.

But Boruc was beaten by Ecuele Manga's powerful header from six yards, the Bournemouth defence having failed to deal with Whittingham's corner.

Bournemouth were controversially denied a winner when Bluebirds goalkeeper Moore kicked the ball at Callum Wilson's back, with the ball hitting the crossbar and Wilson firing the rebound home.

The goal was ruled out and Wilson was booked.

"I thought we were worth a point against a very good side who played on the front-foot very quickly.

"They pinned us back and deserved the lead, but we stayed in the game.

"Eight or nine weeks ago we would have conceded a second goal which would have put it beyond us.

"But we showed great resilience and real determination to come back and offer a threat."

"You'll have to ask the referee why the goal was not allowed, I don't think he had a particularly good game and that's an understatement.

"Callum was looking the other way, he stood his ground which is allowed and the goalkeeper has kicked it at his back.

"That's a real strange decision and ultimately it's cost us two points."