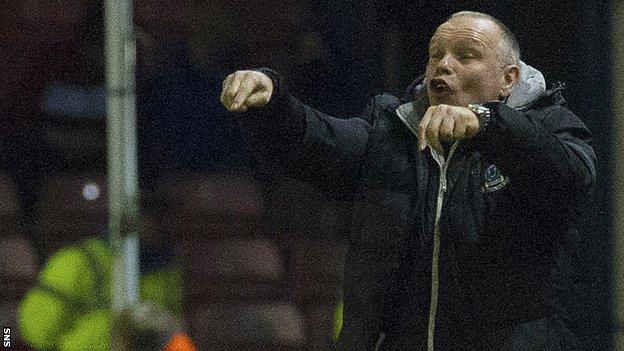 Inverness Caledonian Thistle manager John Hughes hopes his side's run to the Scottish Cup semi-final will help them seal a strong finish in the league.

The Highlanders set up a semi-final date with Celtic or Dundee United at Hampden thanks to Tuesday's 1-0 home win over Raith Rovers.

Hughes' side have been one of the Premiership's form teams this term and are currently third, just four points behind second-placed Aberdeen.

Inverness are hoping to secure European football for the first time in their history and Hughes knows the prospect of a semi-final could help ensure his players stay sharp.

"Hopefully it will keep us going in the league," Hughes told BBC Scotland.

"What we've done this season is absolutely remarkable. We've been very lucky with injuries, we've worked with a squad of 18.

"We want to finish as high up that league as we can, and see where it takes us.

"I said to them after the match 'you deserve that'. Not for tonight's performance but from the minute they came in in pre-season, the way they all came back in shape - that's them getting their rewards."

"In the first half we were very good and a little bit unlucky to come in having not scored a few goals," Hughes added.

"It's all about winning the game, we knew what the prize was - a semi-final at Hampden.

"In the second half we weren't quite at it but we certainly did enough to win the game.

"We're grateful that the goal came because this club deserves to be in a semi-final. It's great for the highlands, great for the club, and I'm delighted for the board and the chairman because they've backed us and I know the financial rewards for getting to a semi-final."

Raith manager Grant Murray said: "The goal came from a set-piece and that's the disappointing thing. They did have a lot of the ball, they put us under pressure and we had to defend a lot of the game.

"We came up against a very good side, a side that's flying at the top end of the Premiership.

"We've got to pick ourselves up from tonight. The Cup run was great but it's over now and we've got to focus on league business."