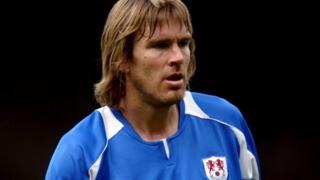 Former Millwall defender Matt Lawrence tells BBC London 94.9 that Lions caretaker manager Neil Harris has all the qualities to be the club's next permanent boss.

Harris, 37, has been placed in charge following the sacking of Ian Holloway on Tuesday.

Millwall are currently 23rd in the Championship, eight points from safety, and Lawrence hopes results between now and the end of the season do not harm Harris' chances of getting the job permanently.