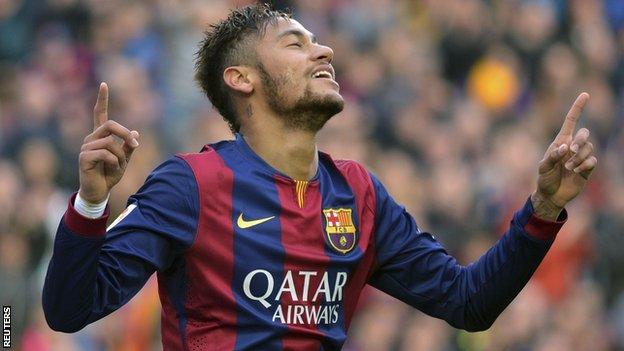 Barcelona can repeat the best season in the club's history and win the treble this term, according to the club's forward Neymar.

The Brazilian said that his side's attack, which also includes Luis Suarez and Lionel Messi, is better than Real Madrid's trio of Cristiano Ronaldo, Gareth Bale and Karim Benzema.

Barca are chasing La Liga, the Champions League and the Copa del Rey.

"We have the team to think about winning the treble," added Neymar.

Barcelona last won the treble in 2008-09, but their season is hitting momentum at a time when Real Madrid are struggling for form.

The Catalan giants are one point clear of Real - who they meet at the Nou Camp on 22 March - at the top of the La Liga table.

In addition, coach Luis Enrique's side hold a 2-1 lead over Manchester City in the last 16 of the Champions League, while they meet Athletic Bilbao in the final of the Copa del Rey on 30 May.

Although Real are through to the Champions League quarter-finals, Carlo Ancelotti's outfit are without a win in their last three matches.

Asked if he thought Barcelona's front three was better than Real Madrid's, Neymar added: "I think so.

"But we focus on ourselves, we don't think about the opponents.

"We try to do damage to rival defences and every day we understand each other better. They are two brilliant players.

"Leo is the best in the world and Suarez is a great goalscorer. It is an honour for me to play with them. They are two brilliant players."