Chelsea's players acted like "babies" during the incident that led to Zlatan Ibrahimovic's red card on Wednesday, the Paris St-Germain striker says.

The Swede was sent off for a tackle on Oscar after 31 minutes but PSG survived the last hour of normal time and extra time to knock Chelsea out of the Champions League last 16 on away goals.

"When I got the red card all the Chelsea players come around," he said.

"It felt like I had a lot of babies around me."

"I don't know if I have to get angry or start to laugh. For me when I saw the red card I was like 'the guy doesn't know what he's doing'," the PSG forward added.

Ibrahimovic, 33, also suggested Oscar feigned injury in the challenge, saying: "I don't know if he was acting afterwards. Doesn't matter. We won the game, we went through and let's see what happens."

The game at Stamford Bridge finished 2-2 on Wednesday and 3-3 on aggregate with PSG going through to the quarter-finals on away goals.

Uefa have confirmed Ibrahimovic's red card cannot be overturned, meaning he will miss at least the first leg of the French champions' quarter-final tie.

All red cards in Uefa competitions are reviewed by the governing body to determine whether mandatory one-match bans are extended.

'Not the British way'

"PSG had to put up with stuff which I find really, really unappealing," the Sky Sports pundit said.

"To a man, they (Chelsea players) surrounded the referee, (Diego) Costa ran 50 yards to get involved.

"That is something we can do without. That is not the British way of doing things, it's creeping into our game, which is, I find, totally unacceptable."

"The worst bit of dirty tricks was from Chelsea, surrounding the referee, the reaction was disgraceful," the former Liverpool defender said.

"Jose Mourinho could end up being the most successful manager ever with the trophies he goes on to win in his career but I don't think him and his teams will be ever be loved because of actions like that.

"Does Mourinho care? I don't think he probably cares. I think it's sad."

The referee's decision will not be overturned by Uefa unless it is a case of mistake identity, the governing body have confirmed.

"Decisions taken by the referee on the field of play are final and may not be reviewed by the Uefa disciplinary bodies," its disciplinary regulations state.

Chelsea manager Jose Mourinho and his PSG counterpart Laurent Blanc had hoped the Sweden striker's red card could be overturned, allowing him to play in the quarter-finals.

Mourinho felt officials had a poor view of Ibrahimovic's sending-off. 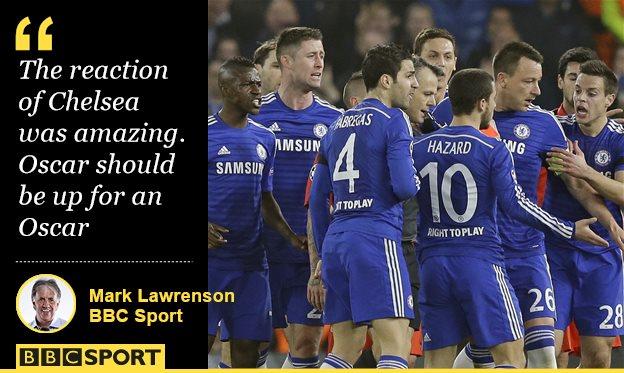