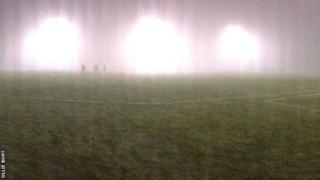 'I could not see my pasty or match'

League official Mike Sampson tells BBC Radio Cornwall that he "had to put glasses on to eat his pasty" as a match in England's south west was abandoned after just 58 seconds.

The South West Peninsula Premier League match between title-chasing St Austell and second-placed Bodmin Town was called off, despite 150 people in the crowd at St Austell's Poltair Park.