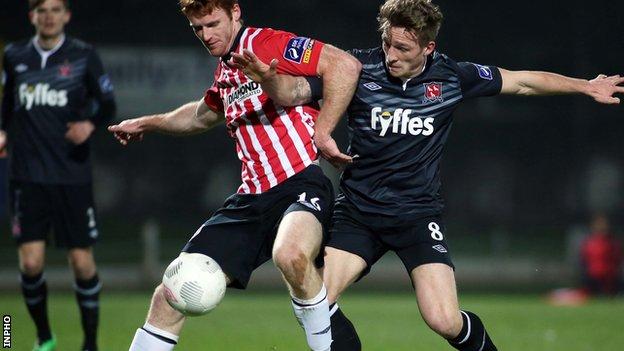 Derry improved after the interval with Philip Lowry and Ryan Curran going close before Massey smashed home the only goal after 65 minutes.

A bumpy Brandywell surface contributed to a poor first half, with Dundalk in control but rarely cutting through a solid City defence.

Doherty produced a point-blank save after four minutes when McMillan got a touch on Daryl Horgan's cross.

A poor clearance from Doherty resulted in McMillan going clear on goal but the Derry keeper made amends by blocking the striker's shot.

Derry defender Shane McEleney almost headed into his own goal from a free-kick while the hosts rarely threatened at the other end.

The game came to life after the break, starting with with Doherty tipping over Ronan Finn's strike from 18 yards.

City's threat melted away after Massey's goal, with the unmarked full-back hitting the bottom corner from Finn's pass.

Lowry failed to find the target with his header late in the game as Dundalk chalked up a second win from two games.