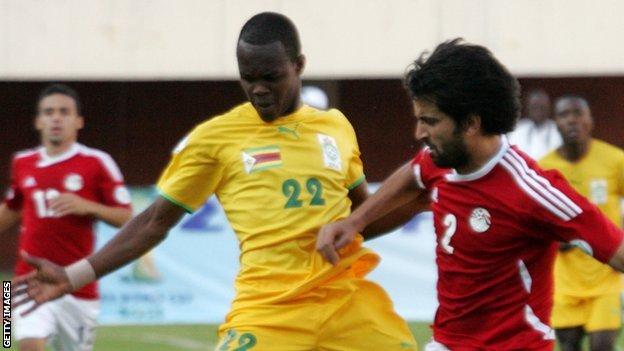 Football's world governing body Fifa said in a statement it had taken the action "as a result of the non-payment of an outstanding debt".

Fifa added that Zimbabwe's Football Association (Zifa) failed to make the payments despite a grace period.

Zifa communications manager Xolisani Gwesela told BBC Sport that the body would appeal against the ruling.

"We have already started to engage authorities in Zurich," he said. "In any process you can appeal - just because a ruling has been declared, it doesn't mean the door has been closed."

Zimbabwe, who have never qualified for a World Cup, have to act quickly because the draw for the African zone qualifiers for the tournament in Russia will take place in July, with matches set to kick off in October.

Zifa is in dire financial trouble, with debts of more than US$4m (£2.7m) , and was recently forced to auction assets from its Fifa-financed training centre to settle a legal dispute with a former employee.

The financial problems date back a long way and when Georgini, nicknamed Valinhos, was appointed in 2008 it was announced that the Brazilian's salary would be paid by the Zimbabwe Tourism Authority as part of a 2010 World Cup memorandum of understanding between the tourism body and Zifa.

Zifa CEO Jonathan Mashingaidze told BBC Sport he "does not see why we have been kicked out of the World Cup, the debt is still there anyway".

He added: "We've been liaising with Fifa and asking for a payment plan. We assume full responsibility of the debt, but the queue is pretty long.

"There are also former national team coaches Tom Saintfiet and Sunday Chidzambwa, and we owe money to banks."