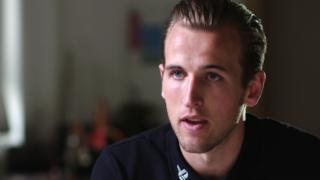 Pochettino key to my improvement - Kane

The 21-year-old says his strength and speed have definitely improved and credits the manager for his upturn in success and confidence.

Kane has scored 26 goals in all competitions, leading to calls for him to be included in the next England squad.

On Friday Kane was named Premier League player of the month for February, the second month in a row he has won the award.

Harry Kane was supporting grassroots football at a PlayStation Schools' Cup match, in partnership with the English Schools' Football Association.

Watch more of this interview on MOTD Kickabout from 07:40 GMT on CBBC and on Football Focus from 12:10 GMT on BBC One, Saturday 14 March.