Brentford boss Mark Warburton expects the Championship promotion race to go down to the final day of the season.

Just four points separate league leaders Bournemouth from the Bees, who are sixth, with 10 games of the campaign remaining.

"It is an incredible league," Warburton told BBC London 94.9.

"You think teams are starting to break away and then see some of the freak results which come out. I think it will go to the last kick of the last game."

The division's top four sides - Bournemouth, Derby County, Watford and Middlesbrough - all have 66 points and are separated by goal difference, while Norwich are a point behind in fifth place.

Brentford have 62 points, with seventh-placed Ipswich Town a point adrift of them while Wolves, in eighth, have 58 points.

"You look at four teams on the same points and, with the games coming up in the next six weeks, it is quite incredible," Warburton added.

"[Ipswich boss] Mick McCarthy referred to it as bonkers and I laughed at the time, but it was probably a very appropriate phrase.

"You couldn't write the script on some of the fixtures. It is remarkably tight."

The Bees, who were promoted from League One last season, have a vastly inferior goal difference to the five sides above them in the table.

While Warburton admits that that may prove to be a disadvantage, he believes a lot could change in the promotion race between now and the end of the season.

"We look at it and will learn from it, going forward. We are in a good position and there are 30 points to play for.

"Looking at the fixture list, there will be a lot of points gained and lost.

"This weekend it is Middlesbrough-Ipswich and Norwich-Derby. The players know if they can deliver a good performance and get the right result against Cardiff, at least two of the opponents will drop points.

"If there are two draws we could gain two points on all of them.

"Likewise, we could lose the game. It is nip and tuck all the way. The players are very aware of the situation and what they have to do." 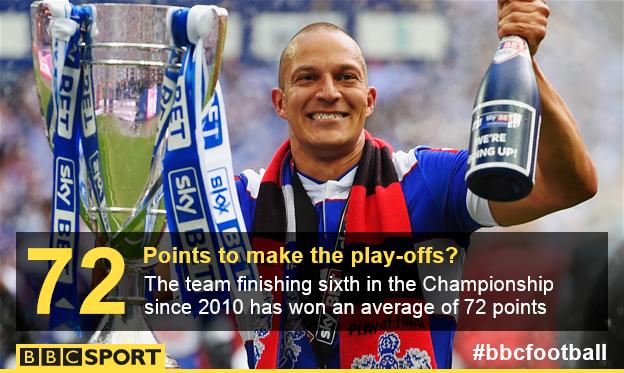 Warburton will leave Griffin Park at the end of the campaign even if the west London club are promoted, with one of the reasons being his disagreement with a statistics-based approach to player recruitment.

With the promotion race so tight, the former City trader is refusing to look too far ahead.

"There are 10 games left and it is a mini-season, but the fact is all through the season we have taken it one game at a time," he said.

"I think that is the right way to do it. There is no point winning against Derby in four weeks' time but losing the four games in between.

"We need to focus on what we have to do. We cannot impact on anything away from here."