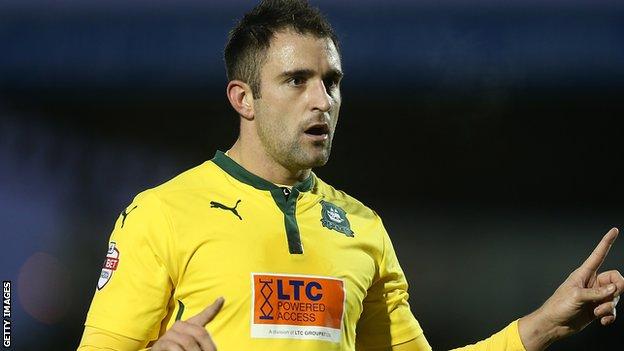 Plymouth Argyle boss John Sheridan thinks it will be a miracle if defender Peter Hartley manages to avoid a ban for reaching 10 yellow cards.

The centre-back must go the next seven games without receiving another booking or he will serve a two-game suspension.

"I don't want him to miss any games but it'll be a miracle if he can stay away from being booked," said Sheridan.

"You go so far into the season and I think it should take 15 bookings for a central defender (to be banned)."

Hartley has made 33 appearances since arriving at Home Park from Stevenage in the summer and forms part of a defence which has kept the most clean sheets in League Two.

The 26-year-old vice-captain has been praised by his manager for his performances since recovering from a hip injury, which have seen the Pilgrims return to the play-off places.

"You can't really work around it, but what will be will be" Sheridan added to BBC Radio Devon.

"Nowadays you get booked for more or less nothing so I think it's a bit harsh."