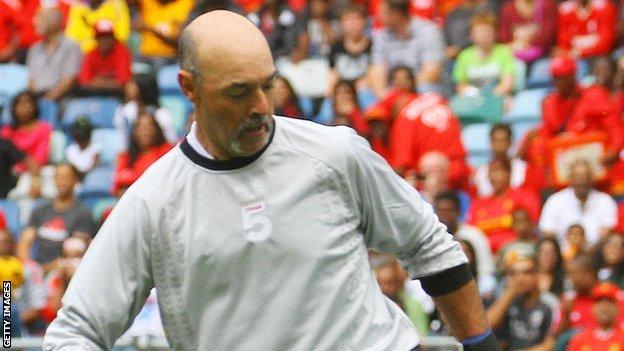 Former Zimbabwe international Bruce Grobbelaar believes players will leave the country as a result of the team's expulsion from the 2018 World Cup.

The Warriors have been punished by Fifa for failing to pay monies owed to former coach Jose Claudinei Georgini.

"If they haven't played for Zimbabwe, they might gain citizenship where they move to and play for them."

The legendary former Liverpool goalkeeper, who played for his country 33 times between 1977 and 1998, is saddened by the situation but not surprised.

"I have been involved with coaching the national team and I know first hand that Fifa pays the Zimbabwe Football Association (Zifa) so it can pay the coaches, but half of that money goes to the government - and where that goes, I do not know.

"I never got any payment when I was a coach. So I know how frustrating it is for the coaches."

With Zifa in dire financial trouble and in debt totalling more US$4m (£2.7m), Grobbelaar cannot see a way out of the situation unless drastic action is taken.

"I think Zifa needs to be dissolved and the organisation started again from scratch. But how can that happen? Governments cannot interfere in football matters - Fifa suspends countries for that.

"The new Zifa would need to be an independent organisation, but who is going to set that up? There are too many hands in the pot of money that comes from Fifa."

"It would need a strong individual that everyone knows in Zimbabwe."