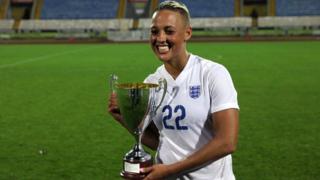 England women's head coach Mark Sampson and goalscorer Lianne Sanderson reflect after their 1-0 win over Canada in the final of the 2015 Cyprus Cup.

Sanderson scored the winner from 15 yards after Jordan Nobbs' through ball, as England lifted the trophy for the third time in six years.

Sampson says he feels "incredibly proud" that the team have found a way to win games ahead of the Women's World Cup in Canada in the summer, while Sanderson says the victory shows the team are "a force to be reckoned with".