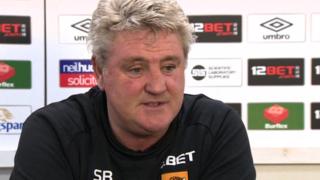 Hull City boss Steve Bruce says he is "delighted" to commit to the club after signing a new three-year new deal as manager.

Bruce says say he has enjoyed his first two and half years at the KC Stadium, and wants to build on the work he has done improving Hull's academy, training facilities and scouting network, as well as establishing the club as a Premier League side.

The Tigers travel to bottom club Leicester City on Saturday, and Bruce says to chance to pull themselves out of the Foxes' reach in the battle against relegation is "a big incentive".