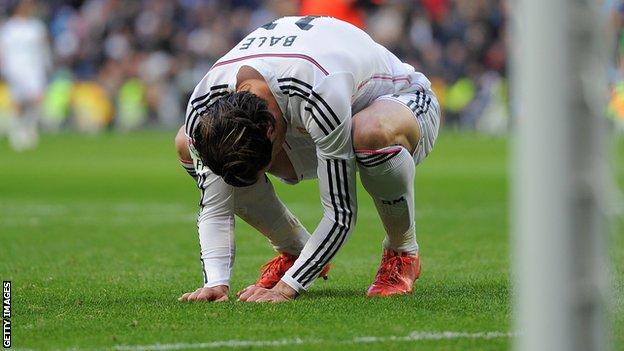 Gareth Bale is under heavy fire in Spain today, unwittingly finding himself the biggest victim in the fall-out from Real Madrid's recent loss of form.

Los Blancos' 4-3 home defeat by Schalke on Tuesday, which nearly sent them tumbling out of the Champions League, was seen as the final straw and has led to an ugly power struggle between club president Florentino Perez and the country's most influential sports newspaper, Marca.

And Bale is, rather unfairly, being placed right in the middle of the battle.

What have they said?

In a full-page question and answer style story in Friday's newspaper, written by senior reporter Enrique Ortego, Marca tear into Bale in a vicious attack, portraying him as a selfish and lazy loner who doesn't play for the team.

Starting off by saying that Bale often appears "absent, lost and identifying little with the cause", the article goes on to describe the Welshman as having made "apparently little effort to integrate with the group 20 months after his arrival".

His defensive efforts are particularly heavily criticised, with Ortego arguing that he should be more capable of carrying out defensive work considering he started his career as a full-back, and even alleging that Bale has been given a different defensive position at set-pieces because "he lacked concentration and was too passive, not attacking balls he should have reached."

And Marca's online edition was even more savage on Friday morning, running additional articles arguing that Bale is in the worst form of his career and quoting an anonymous team-mate as saying: "He doesn't defend because he doesn't want to."

Another story suggests that Carlo Ancelotti is considering dropping Bale ahead of the crucial Clasico trip to Barcelona next weekend, and the overall message is clear: Marca want Bale out.

Is the criticism fair?

Bale, it is perfectly true, has been struggling for form in recent weeks.

He has not scored or assisted a single goal in eight consecutive games, and has gone through long periods of many games without making a significant impact upon the action.

However, that is explained in large part by his unusual playing position in Carlo Ancelotti's unconvincing hybrid 4-4-2/4-3-3 formation which requires him to play as both a midfielder and a forward, with the result that he has struggled to fulfil either role effectively.

And it is also the case that Bale is by no means the only Real player struggling for form, with Los Blancos winning only eight of their 15 games in 2015 - which has seen them knocked out of the Copa del Rey, suffer a 4-0 derby humiliation at Atletico Madrid and lose top spot in La Liga to bitter rivals Barcelona.

Following the midweek Champions League embarrassment against Schalke, however, which resulted in Real's players assaulted by a crescendo of whistles and jeers even though they had just progressed to the quarter-finals, a scapegoat was needed.

Marca have decided to make Bale the victim.

The direct cause for Marca's brutal assassination of Bale was a hastily scheduled press conference held by Real president Perez on Thursday, during which he attacked that morning's Marca front page story claiming that Ancelotti would be sacked if the team lost badly against Barcelona next weekend.

Directly singling out Marca for criticism, Perez suggested that his team's recent troubles have largely been the media's fault and slamming their supposed "lies".

And now Perez is learning the dangers of taking on the media, who can always have the final word in any argument, because Marca have responded by aiming their ire squarely at the man who is widely perceived as Perez's personal favourite: Bale.

There have long been rumours that Ancelotti has been ordered by Perez to keep Bale in the starting line-up, and the under-fire president even made an illuminating gaffe during his press appearance on Thursday by saying: "When I signed Bale," before quickly correcting himself: "When we signed Bale."

Rather than the player, the newspaper's major quarrel is with the president - and discrediting Bale is just a handy way of getting at him.

Marca is by far Spain's biggest-selling and most influential sports newspaper, dedicating page after page of their daily output to the latest goings-on at Real Madrid.

On Friday, as a typical example, no other club is even mentioned until page 14's report of last night's Europa League meeting between Villarreal and Sevilla.

It also has its own radio station and a vast online following, and therefore plays a key role in both reflecting and determining the mood and opinions of Real's famously fickle fans.

The last person to seriously get on the wrong side of the paper, for example, was Jose Mourinho, who endured an increasingly fraught relationship with the media during his final season with the club.

Although Mourinho's eventual departure from the Bernabeu was genuinely as close to 'mutual consent' as can ever be possible, Marca's anti-Mourinho stance (which continues to this day, with the paper gleefully leaping upon every Chelsea defeat) was instrumental in turning many fans against him.

If Marca's problem with Bale becomes a long-term policy, Bale will have a big problem at Real Madrid.

Unfortunately for Bale, Real are at home to Levante on Sunday night and manager Ancelotti - who has always publicly firmly backed the Welshman - must decide whether to leave the former Tottenham man in the starting eleven or take him out of the firing line.

With homegrown forward Jese Rodriguez itching for his first Bernabeu start in La Liga since returning from long-term injury, there is a natural alternative to Bale if Ancelotti wishes to defuse the situation.

But that would be perceived as bowing to media pressure, and stubborn president Perez is unlikely to be advocating such a bold decision to his embattled coach.

Bale, therefore, is likely to play, and have the opportunity to make his critics eat their words. It's no exaggeration to suggest it could prove to be one of the most significant games of his career.