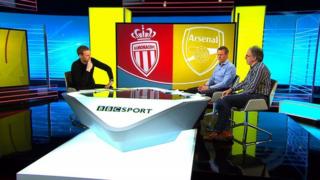 Will Arsenal qualify for last eight?

Dan Walker is joined by Mark Lawrenson and Stuart Pearce as they discuss Arsenal's Champions League second-leg tie away at Monaco.

Arsenal go to Monaco needing to score at least three goals to stay in the competition after losing the last 16 home leg 3-1.

The pundits think the Gunners can win Tuesday's game if they score in the first half, but don't believe they will progress to the last eight.