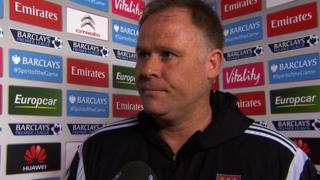 West Ham assistant manager Neil McDonald admits the Hammers were beaten by a better team following their 3-0 defeat to Arsenal.

Olivier Giroud gave the Gunners a first-half lead before late strikes from Aaron Ramsey and Mathieu Flamini made sure of the points.

Allardyce, who left his post-match media duties to his number two, has still never managed a winning team away at Arsenal in the Premier League - losing eight and drawing three of his 11 attempts.