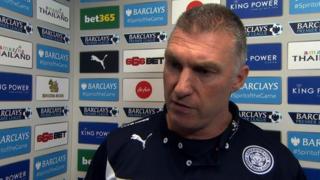 Leicester were 'safe and laboured'

Leicester manager Nigel Pearson is disappointed by his team's "laboured" performance in their goalless draw with Premier League opponents Hull.

Hull ended the match with 10-men after Tom Huddlestone was sent off but Leicester failed to make the extra man count.

The Foxes are now seven games without a win and find themselves bottom of the Premier League table.