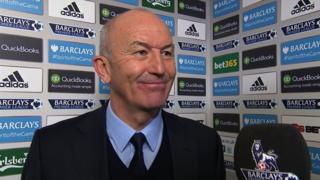 Pulis disappointed with only one goal

West Bromwich Albion manager Tony Pulis says he was pleased with his side's performance but disappointed they only managed one goal against Stoke City.

Brown Ideye headed the decisive goal early on but the hosts could have had more in a dominant display that lifts them 11 points clear of the drop zone.

Ideye has been involved in four of West Brom's last six Premier League goals (three scored and one assist).